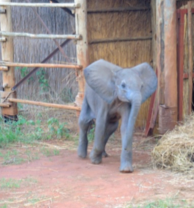 Isolated, with not even a whisper of another elephant for days, Muchichili found himself completely alone on the small island of Hulungwe in the Zambezi River. At only a year and a half old, longing for the comfort of his mother’s milk, the young calf would have remained by himself if not for the heroic efforts of GRI Elephant Orphanage Project.

On Friday, January 8, staff from the Muchichili Safari House spotted the calf alone on the island. Ivan, the Senior Keeper from the GRI Elephant Orphanage, happened to be in the area, and was able to take immediate action. With help from Kanyemba Lodge and Jacana Enterprises, Ivan made it to the island, and found the lone calf. Because he was in a relatively stable condition on the island, Muchichili, the elephant calf, was only watched, with hopes that his herd might still come for him. By Monday morning, it was apparent that his herd would not return, and the long and arduous process of sedating,  then transporting the youngster began. The calf was carried, boated, and finally driven back to the Lilayi Elephant Nursery, a part of GRI. There, he was given his name, “Muchichili”, which means “Winterthorn”, a tree that grows on the island where he was found. Despite being exhausted, malnourished, and dehydrated, Muchichili remained strong and was excited to be introduced to other elephants at the Nursery. Muchichili will continue to be cared for around the clock, with the strong hopes that he’ll, someday, be able to go back to the wild, where he belongs.

The GRI Elephant Orphanage Project helps care for and nurture elephant orphans, like Muchichili. Often, these elephants are made orphans due to the senseless poaching of their family for ivory, which adult elephants carry in their tusks. Requiring milk as often as every three hours, these young elephants stand no chance without the nourishment their mother provides. Without the aid and heroic acts of caring people, like those who staff the GRI Elephant Orphanage, these young, defenseless elephants would become yet more victims of the cruel greed the drives the ivory trade.

Posted On August 14, 2015 ~ 0 Comments
"We should have respect for animals because it makes better human beings of all of us." -Dr. Jane Goodall August 12 was World Elephant Day,…

How Community Can Save Elephants in Zambia

Posted On March 26, 2014 ~ 1 Comment
Zambia...it's a country with beautiful people, teaming with wildlife & elephants, but a place that is home, unfortunately, to poachers. We are excited to be starting a friendship…

Together We Did It!

Posted On October 12, 2014 ~ 0 Comments
THANK YOU! With your generous support, we have reached our quarterly goal of raising $3,000USD for Kavala, an orphaned elephant victim of the ivory trade…