Why We Love Elephants 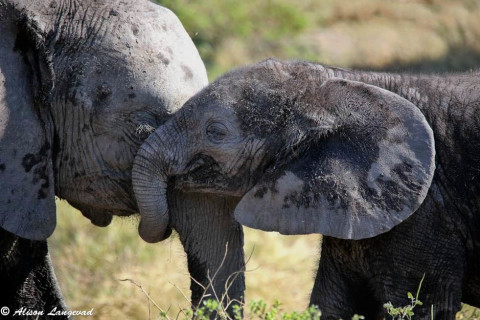 From Dumbo to Barbar, Horton to Manny, elephants are everywhere in pop culture! Humans obviously have a gargantuan obsession with these gentle giants, and here at Elephantopia, we do too! But before I tell you why we love elephants so much, I wanted to find out why YOU love elephants. Here are a few responses we received from our Facebook poll:

I have loved elephants all my life. My grandmother loved them and taught me how special they are. They have always been in my heart because of her. - Vicki

I remember receiving a present as a very young child, it wasn’t big but it was extremely heavy. I unwrapped it [and] found an elephant toy with exact details of wrinkles and all. That was the day I fell in love with elephants and as the years went by my collection built up [and] my love for elephants just kept growing. At 19 I got my first tattoo and you guessed it, it’s an elephant. All my friends and family know how much I love them and have no problems finding me a gift for birthday/Xmas as they know if they get me something to do with elephants I’ll be happy. -Bonnie

When I saw the BBC documentary on Echo of the elephants, she showed me how special they are and then I found The David Sheldrick Wildlife Trust and realised how threatened they are. - Gail

Just as Bonnie, I had elephants toys. Only in childhood I had no idea about life of elephants. Much later as an adult it came suddenly when for the first time I saw chess set made of ivory. And that’s when something kicked in- why people can’t just play chess using wooden or plastic pieces.- Igor

Speaking from experience, I believe in the importance of sharing our passion and love for wildlife with others. Vicki mentioned how her grandmother taught her about the importance of elephants, and it’s left a forever impact on her heart. Likewise, every Monday/Wednesday/Friday, Elephantopia shares “Elephant Facts of the Day” on our social media accounts to help educate our followers about elephants and their importance in our ecosystem. As a keystone species, hundreds of types of trees rely on elephants for propagation. Many smaller animals find water pooled in elephant footprints or from the small wells that elephants dig using their tusks. Without elephants, the ecosystem of Africa would be drastically changed.

Bonnie mentioned a realistic toy that she was given that sparked her interest in the species. Elephantopia looks to partner with artists and authors alike to raise awareness in the general public. Recently, we partnered with children’s book author Marian Hailey-Moss who wrote a coloring book about an elephant named Nala. The coloring book tells a simple story of an elephant family and their importance in the circle of life, and asks the readers to help protect the future of elephants by saying no to ivory. It’s our hope that through initiatives like this, people like Bonnie will find themselves drawn to love and protect these amazing animals with us.

Gail watched a documentary and Igor had an encounter with carved ivory that opened his eyes to how ivory belongs on an elephant, not as a chess piece. Every weekend, Elephantopia shares a “Happy Weekend” video clip that might be from a documentary, or might just be from a tourist viewing elephants in the wild in Africa. These videos are ways for people to see elephants in their habitat, living. They use their tusks to dig for water, scrape trees for bark to eat, to fight off predators, and much more. Tusks aren’t meant for trinkets — ivory belongs to the elephants.

Elephantopia loves elephants because elephants belong on the earth. They are integral to keeping the balance of the ecosystem and we have so much to learn from them. Elephants are caring creatures, who live in family units, know how to play, show affection to one another, and even communicate through body language and subsonic rumbles. But right now there are only 400-500,000 elephants left in Africa. While this may seem like a lot, one elephant is killed every 15 minutes for its ivory which is sold on the illegal wildlife market. That’s nearly 100 elephants killed a day by poachers. According to a study in 21014 by National Geographic, more than 100,000 elephants were killed from 2010-2012. At this rate, elephants will be extinct in our lifetime if nothing is done to stop the killing.

Ivory sold on the illegal wildlife market funds terrorists organizations. And the ivory is smuggled into China and the United States to be sold as carved trinkets—status symbols to many. It is our hope that as people are educated about the importance of elephants, they will see carved ivory as a symbol of death, not as a symbol of status.

What can be done? Will elephants soon only be found in cartoons like Dumbo and Barbar, Horton and Manny?

That’s where YOU come in. You’ve told of WHY you love elephants. Now it’s time to ACT on your love. Below are three ways to get involved with us and join the herd:

Finally, I’d like to personally invite you to SAVE ELEPHANTS and BUILD COMMUNITY with us by coming to Zambia on our photography safari in May 2016 led by founder and director of Elephantopia, Elizabeth Chitwood. We will be visiting the GRI Elephant Orphanage in Lusaka, exploring two national parks (Kafue and South Luangwa), and visiting local schools to read and give books to the children. If you would like to see the full itinerary, click HERE, and email us at [email protected] for details.

Planning My Trip to Thailand

The End of the First Month

Posted On January 28, 2014 ~ 1 Comment
It's hard to believe we're already coming to the end of January. A lot has happened for elephants this year. IN CHINA: On January 6,…

Posted On January 9, 2014 ~ 7 Comments
(Note: the content of this blog shared from Juliette Speaks) The NY state assembly will meet on January 16 to discuss the ivory trade. Please email…