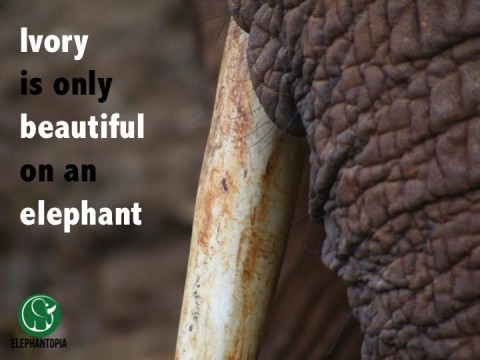 I love elephants and sharing my passion with others through educational campaigns. So I decided to ask a few people if they have ever seen ivory tusks. James in California uses them for toothpicks, although he complains that they are a little cumbersome. Nancy in Vermont tried to ski with them, but found the traction a little slippery. And Llyod in Missouri quickly realized that they don’t work as floaties for the pool. And no one seemed to realized that these ivory tusks came from an elephant.

If all these uses for ivory seem a little ridiculous, so is using elephant tusks for ornamental purposes. The people and scenarios  described above are fictional but unfortunately the fact of the matter remains that ivory is often used for ornamental purposes such as carvings and jewelry, and many people who consume ivory do not realize that their ivory came at the expense of an elephant’s life. Every 15 minutes an elephant in Africa is killed by poachers for their ivory tusks. That’s nearly 100 elephants a day, slaughtered at the hands of poachers who seek this “blood ivory” to sell on the illegal wildlife market. There are approximately 400-600,000 African elephants left in the wild. Do the math and it’s just a matter of a decade before we could see the extinction of the world’s largest land mammals. But not on our watch…

READ THE FULL ARTICLE FEATURED ON ONE GREEN PLANET HERE

Posted On June 11, 2013 ~ 3 Comments
CNN is asking for YOUR opinion on what news should be covered - PLEASE VOTE TODAY AND SELECT "ILLEGAL ANIMAL TRADE" TO BE NO.1 - you…

Posted On April 6, 2015 ~ 4 Comments
Thanks to Stacy James for bringing this to our attention. NV SENATE COMMERCE COMMITTEE VOTES ON THE IVORY BILL THIS WEEK.  1. Complete and Share…

Happy Weekend: Cool off with a Refreshing Swim

Posted On August 10, 2014 ~ 0 Comments
This video shows elephants swimming across a river, using their trunks as snorkels. (Although the people that were rafting the…