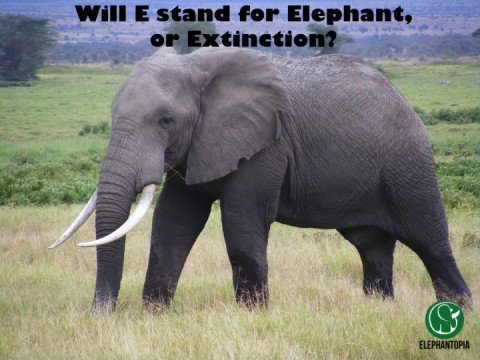 A few weeks ago, I shared how the NRA in the United States is opposing the ivory ban. I was shocked to receive emails and comments from NRA members defending their desire to kill elephants and to sell ivory. My personal favorite statement was, and I quote,

I really don’t see how selling something increases demand.

A quick visit to wikipedia will refresh one’s understanding of how supply and demand work: when there is high demand for something, an equilibrium will not be found until the supply can successfully meet that demand. Unfortunately in the case for elephants and ivory, *the demand for ivory has exceeded the reproductive capacity of elephants.  Which means of course, that the animal will eventually die out.  (*shared from Marketplace)

Would flooding the market with ivory help drive down the demand? CITES allowed two legal sales of ivory, one in 1998 and one in 2008. However, instead of satiating the desire for ivory, it only increased the appetite of the world’s leading consumers (China & the US). Patrick Omondi, species management coordinator for the Kenyan Wildlife Service states, “This legal sale has restarted the demand for ivory, and illegal poachers and smugglers are back in business.” Since the 2008 legal ivory sale, elephant poaching rates have made a tragic comeback, reaching pre-1989 levels of up to 30,000 a year.  And the sale did not lower the cost for ivory. According to Shruti Suresh from the Environmental Investigation Agency, the price of legal & documented ivory went up from $US 150 per kilogram, to now more than $US 1,500 per kilo. With ivory fetching such a high price, it’s no wonder poachers are trying to get illegal ivory on the market under the guise of the legal ivory trade.

As the world’s second highest consumer for ivory, a ban would cost potential ivory dealers and traders here in the United States hundreds and thousands of dollars in lost sales.  And that is what the NRA and antique dealers here in the US are worried about: loosing the value and ability to sell their ivory or the ability to import massive quantities of ivory into the US from hunting expeditions.

The NRA has 3.1 million members and a call has been issued for a rally against the ivory trade. The current law allows each hunter to bring back two elephant trophies. But looking at the numbers, 3.1 million hunters far exceeds the estimated 400-600,000 elephants left in Africa. And all these people are calling on the US government to revoke the ivory ban.

In 2013, 200,000 letters were sent to the White House calling for the United States to take a stand against elephant poaching. Your voice was heard, as the administration formed the task force to investigate illegal wildlife trafficking partly in response to the public outcry over the escalating poaching crisis.

In 2014, can we rally 400-600,000 people to be the voice of the elephants? Please copy/paste the note below to the White House (click HERE for the direct link) and ask your friends to do the same. Remember, when the buying stops, the killings can too.

To the Honorable Mr. President,

I want to thank you for your dedication to end illegal wildlife trafficking. I am pleased with the recent ban on ivory sales in the US, as our nation is the world’s second largest consumer of ivory. As you know, the illegal ivory trade has direct links with terrorist organizations such as Al Shabaab, Kony and the LRA who are a threat not only to the United States, but to African governments and communities.  It is my hope that other countries will quickly follow the example of the United States, banning sales of ivory & increasing the penalties for poachers & dealers of ivory. This is a monumental step toward halting the illegal ivory trade. Thank you.

Update from the Elephant Orphanage

Posted On December 26, 2014 ~ 0 Comments
Thank you for helping us reach our quarterly goal of $3,000USD for Kavala at the GRI Elephant Orphanage in Zambia. If you haven't joined the…

A MOMENT OF SILENCE

Posted On April 29, 2013 ~ 6 Comments
Poachers with the aid of "rangers" have killed all rhinos in Limpopo National Park in Mozambique, part of the Great Limpopo Transfrontier Park. "Mozambique's game…

Posted On February 27, 2013 ~ 0 Comments
WWF submitted the petition to the Prime Minster of Thailand earlier today with over half a million signatures from 200+ countries around the world, asking…