How a Birthday Party Can Change the World 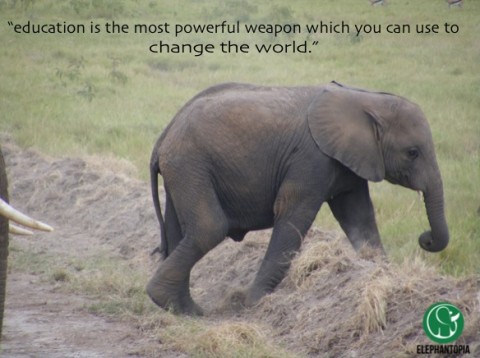 Elisabeth and her twin brother Sam were turning 7 years old and they had some big plans on how to celebrate this special birthday: to adopt an elephant! The twins set out to invite their friends to their party asking for donations instead of presents. And they invited me to attend the event.

When I arrived, I saw the house was decorated with stuffed animal elephants, decals with elephant facts, and foods shaped like elephants. The TV was playing elephant videos and everyone was having fun, while learning about, you guessed it, elephants.

Before dessert was served, I was given the opportunity to share facts and stories about elephants with the children (and adults) attending the party. I began by having everyone make “trunks” with their arms and wave them around, explaining that elephants raise their trunks in the air to smell newcomers and assess possible threats.

I proceeded to show pictures from my recent visit to the David Sheldrick Wildlife Trust stockades in Kenya. I had photographs of the elephant Elisabeth was adopting, little Mbegu. This calf was found by DSWT at approximately 7 weeks old. She was lost from her herd after her family fled the area following the shooting of an elephant by Kenya Wildlife Service due to human-elephant conflict. Local villagers, not interested in having a baby elephant in the community for fear the mother would return and stampede, began to spear little Mbegu (scars on her ears can be seen below). DSWT was called by KWS to come rescue the calf. Her wounds were cared for by the vets at DSWT and she is now on her way to becoming a happy, healthy elephant.

Mbegu getting ready for bed

The kids were fascinated with the elephant-orphans. I showed them these best friends playing and this cutie who didn’t quite know what to do with its trunk.

Mbegu can be seen in the background, while the other youngsters were playing in the dirt

The pictures and stories made their way into the hearts and minds of the children at the party…and the adults. After the presentation while the kids were chowing down on cake and donuts, many adults came up and wanted to learn more about the elephant poaching crisis. Why? Because they had never heard of the it.

One key to changing the future for elephants is through education. In countries far from Africa, it’s almost guaranteed that the average adult does not know about the crisis elephants are facing. These are the facts:

After the evening was done, Elisabeth’s mom thanked me for coming and shared this with me. Turns out, Elisabeth’s love for elephants and her desire to sponsor an elephant were started when she met me a few years ago. Through my enthusiasm for the animals, my advocacy and education campaigns I share on Elephantopia, Elisabeth’s life was changed. Now she is an ele-advocate who is making a tangible difference in the life of Mbegu.

Do you want to do the same?

Do you want to be an ele-advocate?

Do you want to inspire others to take up the cause of the elephant?

Then join the herd. Save elephants. Build community. This is how:

Become a sponsor for Kavala, an orphaned elephant whose mother was killed by poachers. Or march in October to spread awareness and educate the public about elephants and the ivory trade (there are over 50 cities worldwide participating in the event!) Or share us with your friends on Facebook and twitter so that more people can become educated about elephants and the ivory trade with ways to help make a difference. As Nelson Mandela said, “education is the most powerful weapon which you can use to change the world.” And so we are using education to help save elephants.

Posted On April 7, 2013 ~ 2 Comments
Elephants are awe-inspiring. They are the world's largest land mammal. They live in families. They have emotions and communication methods. They are incredibly intelligent and…

Posted On September 6, 2013 ~ 0 Comments
We are just one month away from the October 4 International March for Elephants! Yesterday, I was proud to meet Rosie Plaia from Different Rhythm…

NRA Opposes the US Ivory Ban

Posted On March 6, 2014 ~ 11 Comments
Shocking news this week: the NRA (National Rifle Association) asked 3.1million members to call on congress to urge them to block the new ivory ban…