The Elephant in Gainesville 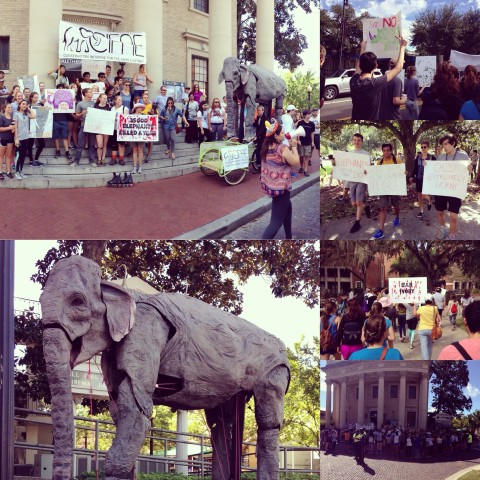 This past 3-4 October, Elephantopia was proud to support the Global March for Elephants and Rhinos (GMFER) in Gainesville, FL. The weekend began with festivities at First Magnitude Brewing Co with a benefit concert to raise awareness about elephants and the ivory trade. We raffled off some beautiful artwork from Liora Davis, a few gift certificates for World of Beer and some Elephantopia gear, all proceeds going towards our project partners in Zambia at the GRI Elephant Orphanage. We received more signatures for our petition to ban ivory in FL and more than 20 thank-you cards were written from adults and children to rangers who risk their lives protecting Africa’s wildlife.

Message for the day!

Some of our awesome volunteers!

Thank You letters to rangers

Sunday we joined forces with CIFAE to march through the streets of Gainesville. Over 50 people gathered to follow a life-size, mechanical elephant down University Ave, ending at the Hippodrome. Chanting: Say No to Ivory and Elephants are Big and Grey, Let them Live Another Day, bystanders and cars got involved with the crusade to raise awareness about elephants and the ivory trade.

But what exactly is going on with elephants and the ivory trade?

Here are the real numbers:

Every 15 minutes an elephant is killed for it’s ivory.

By 2025, elephant may be extinct in parts of Africa.

100,000 elephants have been killed over the past three years.

More than 1,000 rangers have been murdered by poachers in 35 different countries over the last decade.

An elephant is worth 76 times more  alive than it is dead. While an elephant tusk can sell for $21,000 on the black market, but a single living elephant can draw billions of dollars over the course of its lifetime if properly taken care of.

Tourism from a single elephant generates $22,966 per year: Elephants draw in visitors to national parks and wildlife refuges in many parts of Africa and Asia, providing capital to local communities in developing nations.

Zakouma National Park in Chad has lost 90 percent of their elephants since 2002 due to poaching.

$1,607,624.83: How much a healthy adult elephant could have contributed to the local economy over the course of its lifetime, had it been kept alive.

300: The amount of tusks collected and sold that funded terrorism by Seleka rebels when they overthrew the Central African Republic (CAR) government. Poachers often profit off of elephant slaughter as a means to fund human slaughter as well. In 2008, 800 people were killed by Kony, whose army was likely heavily supplied with guns and ammunition paid for from dead elephants.

70 years: The average lifespan of a healthy elephant is only slightly lower than the average life expectancy of a human being (78.8). However, female elephants typically produce offspring every 3 to 5 years, meaning that the rate of reproductive activity is much slower and therefore the potential to wipe out populations in any given area is much higher.

Just because the GMFER2015 is now over, doesn’t mean the fight to save elephants and build community is — we are still looking for YOU to JOIN THE HERD with us! If you haven’t already, sign our petition to ban ivory. Then become a foster parent for Kavala with us, a victim of the ivory trade. We need to raise another $3,000USD by December 2015! Finally, want to go to Africa and see these magnificent animals with your own eyes? Join us as we take a Journey to Zambia May 2016; there’s still a few spots open, email us here for details!

Posted On January 29, 2014 ~ 4 Comments
Do you own ivory? Or know someone who does? Robbie Marsland, the UK director of the IFAW, said: “Many people have unwanted ivory trinkets and…

Elephant Fact of the Day

Posted On March 11, 2013 ~ 4 Comments
On our facebook page, every Monday, Wednesday and Friday we post one fact about elephants along with a beautiful photograph. If you would like to…

HAPPY WEEKEND: baby elephant learns how to use her trunk

Posted On November 21, 2015 ~ 0 Comments
Have you ever seen an elephant learn how to use her trunk? Get ready for some big smiles watching…