Take a moment this weekend to see how much YOU know about elephants! This fun, interactive quiz is great for the whole family. Let us know what your score is - Elephantopia scored PLATINUM! That’s because we LOVE ELEPHANTS and are passionate about sharing that love through education. Together, we can create a harmonious future for elephants and humans! 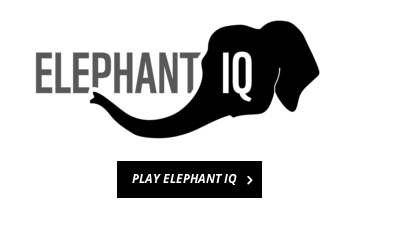 We received some emails with various questions about elephants. Maybe you have some too. We are going to begin to answer these questions every Thursday. Send us a note with yours and you can be featured here too!
QUESTION: A reader on our Facebook Page asked “How Do Elephants Float?” 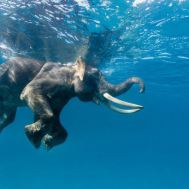 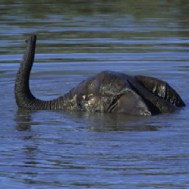 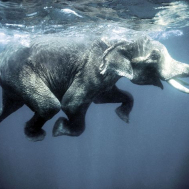 ANSWER: Elephants are the largest land mammals weighing between up to 14000lbs, so seeing these creatures in the water is a pretty big splash! It is not uncommon to see elephants swimming, using their trunks as snorkels. They enjoy the water, it cools their body down and cleans them. And when in deep water swimming, they can float, due to the high percentage of body fat. IRONICALLY, hippopotami can neither swim nor float! This is because their bodies are too dense.
Below are some videos showing elephants swimming and floating.

We received some emails with various questions about elephants. Maybe you have some too. We are going to begin to answer these questions every Thursday. Send us a note with yours and you can be featured here too!
QUESTION: A reader on our Facebook Page asked what do we mean, “creating a harmonious future for elephants and humans.”
ANSWER: We love elephants! But the largest living mammals on planet earth are in trouble. Human-elephant conflict over space and the greed for ivory is destroying the elephant populations in the wild (in Africa, extinction is possible as early as 2020!) And in captivity, elephants are abused and tortured for human entertainment in circuses and in some poorly run zoos. Elephantopia’s mission is to create a future where elephants AND humans co-exist in harmony together. We understand how important it is to save the elephants - they are a keystone species to the environment and have much to teach us. There are a number of great organizations dedicating time, research and money into creating: safer habitats for elephants, raising up rangers and elephant advocates from among local people in Africa,  strengthening local and national governments to protect elephants, creating harsher penalties for ivory poachers, petitioning circuses and zoos, and creating sanctuaries for abused elephants. Our aim is to share this relevant information in one localized place in hopes that the education people receive from our posts will transform into action. We do this by sharing facts about elephants every MWF. We also share quotes from prominent conservationists, photographs of elephants so people who don’t usually see them become more aware of these majestic animals, and every saturday we share a Happy Weekend video clip. Finally, we share the latest news of elephants and write our own responses to what’s happening globally and locally, with opportunities for personal involvement. We are hopeful that there is a future for elephants to live in peace and harmony with humans. It’s just a matter of creative conservation innovations, which is what this project is all about discovering.

We received some emails with various questions about elephants. Maybe you have some too. We are going to begin to answer these questions every Thursday. Send us a note with yours and you can be featured here too!
QUESTION: Karin Serneels on our Facebook Page asked why elephant ears appear to have a “bubble” behind them.
ANSWER: Elephant ears are fascinating organs! Although it does appear as if there is a bubble behind the ears, one is seeing the capillaries, veins with blood pumping through them, and muscles attaching the cartilaginous sheet to the neck. From the front view, when they are using their ears to cool down, the air flowing behind them may also create a bubble-like shape to the ears. Here are a few fast facts about them:

Check out these magnificent ele-ears!

Learn  more about Elephants by visiting This Page. 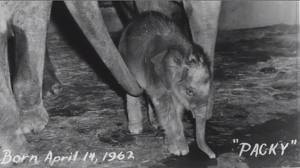 Packy, the oldest male Asian elephant in North America, turns 51 this week at the Oregon Zoo. Visitors can wish him a happy birthday during the zoo’s Elephantastic celebration, April 14.

We received some emails with various questions about elephants. Maybe you have some too. We are going to begin to answer these questions every Thursday. Send us a note with yours and you can be featured here too!

QUESTION from Concerned Mother in Houston:

I recently took my son to the zoo and he was very depressed when we saw the elephants. He didn’t understand why such large animals are in zoos. Now he wants to grow up and help elephants get out of zoos. My question is, why are elephants in the zoo to begin with?

It is troublesome to see such large animals in captivity. And there are many groups who would like to see elephants only in the wild and not at zoos. However, zoos play an important role in education and raising public awareness. First off, your son wants to work with elephants, mainly in part because of his experience at the zoo. If he had not been exposed to these amazing animals at the zoo, there is a chance he would not be interested in them. I know from first-hand experience myself that my love for elephants is directly related to the zoo. When I was six, I went “behind the scenes” at the Memphis Zoo and fed an elephant. That experience alone engendered me to these magnificent animals.

Zoos that are affiliated with the AZA (Association of Zoos and Aquariums) are required to meet certain guidelines for animal care. These zoos are also required to provide animal enrichment opportunities, which help keep the animals active and happy. So before visiting a zoo, check to see if they are accredited. Currently, there are 221 listed with the AZA. This will assure you of the highest, most advanced quality of care for the elephants, and all animals there. 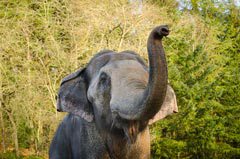 Photo by Michael Durham, courtesy of the Oregon Zoo.

This weekend, one of the most prestigious zoos in North America for elephant care, the Oregon Zoo, is celebrating a very special pachyderm birthday. Packy the elephant is turning 51 and has been instrumental for teaching people about Asian Elephants. As one Zoo volunteer said, “People only protect what they know…and this all a wonderful chance to get to know about Asian Elephants.” Packy is “the largest, oldest Asian bull elephant in North America, and he has ushered in a new and better understanding of these magnificent pachyderms.”

So are zoos ideal? No. In a perfect world, all animals would be living in the wild. We hope that maybe someday there won’t be a need for zoos. But until then, zoos do play an instrumental role in raising public awareness and helping with species survival. Below is a 5 minute video from the Oregon Zoo from last year’s birthday party for Packy.

We received some emails with various questions about elephants. Maybe you have some too. We are going to begin to answer these questions every Thursday. Send us a note with yours and you can be featured here too!

Is China solely responsible for the ivory trade issue, or is there something we need to change here in the States to help?

The Union for Conservation of Nature estimates that the illegal ivory trade is now three times as large as it was in 1998. And seizures of illegal ivory shipments over one ton (or 800 kg) in size have doubled since 2009. A 2011 study from CITES monitored 60 of the locations most-frequented by elephants. They found that an astounding 7.4 percent of those elephants were killed illegally just that year. On those sites, which account for about 40 percent of the entire African population, they estimated that 17,000 elephants were killed.

One wonders, where is all this ivory going? Most of it comes from Africa and ships to countries in Asia. The countries involved in this illegal trade are often called the “Gang of Eight”: the exporters Kenya, Tanzania and Uganda; middleman states Vietnam, Malaysia and the Philippines; and consumers China and Thailand.

“The Chinese hold the key to the elephants’ future,” said Iain Douglas-Hamilton, founder of Save the Elephants. “If things continue the way they are, many countries could lose their elephants altogether.”

And since the beginning of 2012, more than 32,000 elephants have been illegally killed, claims the Born Free Foundation, a wildlife organization. Conservationists say the majority of ivory is sold to China, where it sells for more than $1,300 a pound on the black market.

“China is clearly driving the illegal ivory trade more than any other nation on earth,” said Tom Milliken, an elephant expert with the wildlife trade-monitoring network Traffic.

It would be easy to solely blame China. And evidence does show that much of the ivory trade is based on Asian consumption. However, China is not alone in it’s transgressions. In America, and other countries where the issue of ivory seems irrelevant and almost non-existent, we participate in the ivory trade through apathy. Most people don’t realize that elephants will be extinct in some parts of Africa by 2020. And when we do learn about it, nothing is done. Apathy, the lack of concern and indifference, is just as bad as poaching. America, through apathy, should be listed with the “Gang of Eight” because standing by and idly watching while an entire species is destroyed carries the same amount of bloodshed as poaching. (Check out this latest blog post on apathy, the greatest threat to elephants, for more details).

So please, take a moment and do something about this. SHARE THIS BLOG with people who may not know about the the elephant crisis. SIGN THIS PETITION and then get your friends to as well. 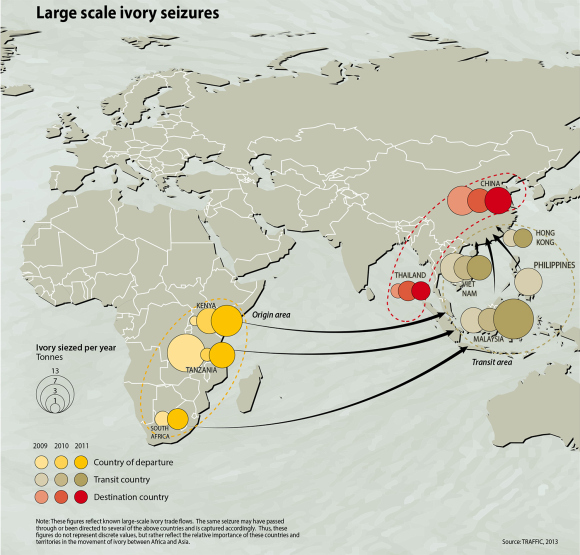