Take two minutes to enjoy these playful ellies - we promise it will leave a smile on your day!

Enjoy a minute walk with this beautiful elephant herd!

“IVORY BELONGS TO ELEPHANTS - ELEPHANTS IN THE WILD.”

Jane Goodall and Dr. Iain Douglas-Hamilton share about this iconic day in history - and what is needed next.

A year ago Amboseli Trust for Elephants went viral showing an elephant calf being rescued from a well. We wanted to share with you this wonderful video, showing the happy news that one year after being rescued, Zombe’s calf is contented and healthy, growing up in the wild with his mother and big sister.

Roaming wild and free, in many years time, this young calf may be key to the future survival of the species.

The Western Black Rhino (pictured below from CNN) was last seen in 2006. This subspecies of the black rhino is native to Africa and has been declared by IUCN (International Union for Conservation of Nature - the world’s largest conservation network) to be extinct. 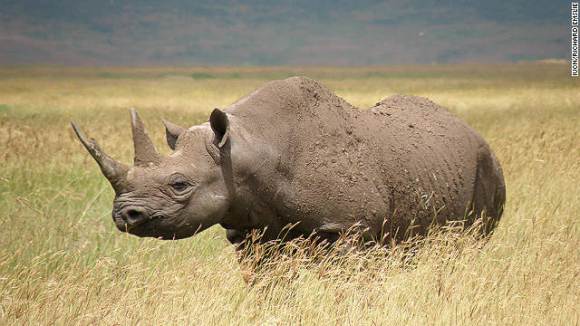 The black rhino species is now listed as “critically endangered” and the northern white rhino is “teetering on the brink of extinction” (IUCN reports to CNN). In 1960 there were roughly 70,000 black rhinos. Today an estimated 4,000 remain.

“In the case of the Western black rhino and the Northern white rhino, the situation could have had very different results if the suggested conservation measures had been implremented,” said Simon Stuart of the IUCN.

While we mourn for the Western Black Rhino, this tragic loss of an iconic subspecies is just a foreshadow of what is to come if nothing is done to stop the demand for illegal ivory and rhino horn. Every day, 96 elephants are slaughtered for their ivory tusks (please click to learn more & sign the Wildlife Conservation Society’s petition to have the United States declare a moratorium on ivory sales in the U.S.) At this rate, estimates are between 10-50 years until elephants are extinct in the wild.

The greatest demand for ivory and other illegal wildlife parts is led by China. Just this last week, the largest ivory seizure in Chinese history took place in Xiamen. Customs officials “smashed” a transcontinental smuggling ring responsible for illegally importing 12 tons of ivory worth 603 million yuan (HK $767 million). Two gangs were responsible for the smuggling in of well over 3,000 ivory tusks this year (that’s about 1500 elephants).  Earlier this week in Tanzania, three Chinese nationals were arrested with 797 elephant tusks. Until the demand is suppressed, the Western Black Rhino is a sad example of the future for many of Africa’s iconic species.

So how to stop demand? The combination of stricter laws against ivory trade and raising public awareness through education. With most of China’s citizens having a misunderstanding of where ivory actually comes from (because the Chinese word for elephant literally means “teeth” most people do not realize you must kill the elephant to harvest it’s “teeth”), WildAid and other organizations are working hard to change public perception and understanding of the ivory trade. Artist Jay Asher explains his passion for using art to educate,

By transforming consumers into conservationists, we can directly impact the future of Africa’s rhinos and elephants.  Through these educational public media ads (see below), the hope is for consumers to become advocates for elephants and rhinos rather than consumers of ivory and rhino horn (Learn more about the campaign HERE.)

But does education and advocacy really do anything? Will it change the future for the elephant? Or the rhino?

That is why we do what we do on this blog and through Facebook/Twitter. To raise awareness. To provide ways for people to get involved and help create a better future for elephants and humans to exist TOGETHER for much more than the next 50 years. Conservation and education efforts DO work. The IUCN testifies that the southern white rhino subspecies, which at the end of the 19th century had less than 100 left in the wild, now has an estimated population of 20,000.

And while the U.S. has not placed a moratorium on ivory (YET), we are proud to see that they will be crushing their ivory stockpiles in Denver this November 14. We leave you with this inspiring video from the U.S.Fish & Wildlife Service (click to read details about the upcoming crush):

A beautiful way to start your day, watching this short video full-screen!

Stunning images of animals and then LOTS of elephants at ground-level, thanks to the Elephant Hide, a steel shipping container buried underground next to a watering hole in Botswana that lets photographers get one-of-a-kind images. Enjoy! 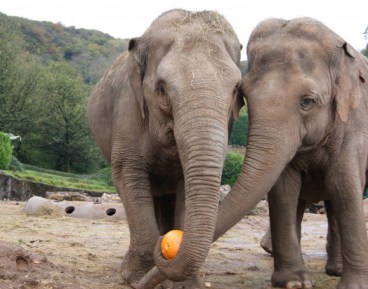 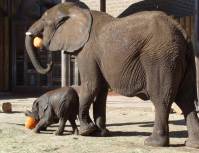 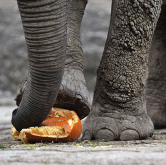 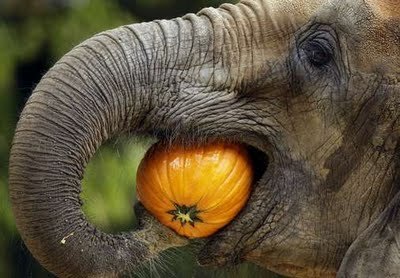 Watch the elephants at the Elephant Sanctuary in Tennessee enjoy scrumptious treats:

And CLICK HERE to see a baby elephant experience the yummy taste of pumpkins for the first time in a “squishing of the squash”!

This beautiful elephant family reunion is sure to bring a smile to your weekend!

October 4 was World Animal Day. It was also the inaugural International March for Elephants. Thousands of people around the world in over 40 cities marched, raising awareness about the plight of the elephant. As stated by Elizabeth Chitwood, leader of the Houston March:

Unless we STOP THE TRADE, an elephant is killed every 15 minutes.

Unless we STOP THE TRADE, a ranger looses his or her life - already 5,000 in the last ten years

Unless we STOP THE TRADE, terrorists like Al Shabaab will continue funding their extremist agendas.

Today we say loud and proud - STOP THE TRADE, SAVE THE ELEPHANTS!

The day continued with a testimony from Andrea Drager, PhD student at Rice University who formerly worked with the Peace Corps in Central Africa studying the Forest Elephants. She shared the importance ecologically these elephants have to the forests, as “the gardeners” and the devastating effects poaching has on both the forest & the people living there. Peter Riger, Vice President of the Houston Zoo Wildlife Conservation Society, followed her, calling for world leaders to create an international ban on ivory noting that much “legal ivory” entering the US feeds the illegal ivory trade. To save the elephants, we must ban the trade. He applauded the people of Houston for taking a stand today for elephants. Both speakers were awarded a gift from co-leader of the event, Ana Shah. Peter was gifted one year fostering an elephant through David Sheldrick Wildlife Trust and Andrea, one year of a rhino from DSWT.

Then the fun part began - we marched! A few of our chants:

Elephants! Too big to hide - stop the elephanticide!

Elephants! Are large and gray - let them live another day!

Ivory - is blood red stained (repeat) - Burn it all and stop the trade (repeat)!

Say NO to ivory! Extinction is forever!

Elephant poaching is a crime extinction - is for all time!

The event closed with a proclamation from the Mayor of Houston, announcing that Annise D Parker proclaims October 4, 2013, as March For Elephants Houston Day! As people left, each was given a goody-bag generously donated by Whole Foods Kirby in Houston. We were thankful for both the support of Whole Foods & the Houston Zoo.

Elephantopia was thrilled with the turnout, the event itself and the positive momentum from Houston, being loud for the elephants! We are proud of Houston for raising over $1200 for the event & David Sheldrick Wildlife Trust. Many elephants will be helped from the generosity of H-Town.

This weekend, we will be busy creating a photo album of the event & sharing some videos, but for now, here are a few pictures capturing the essence of this monumental day!