“IVORY BELONGS TO ELEPHANTS - ELEPHANTS IN THE WILD.” 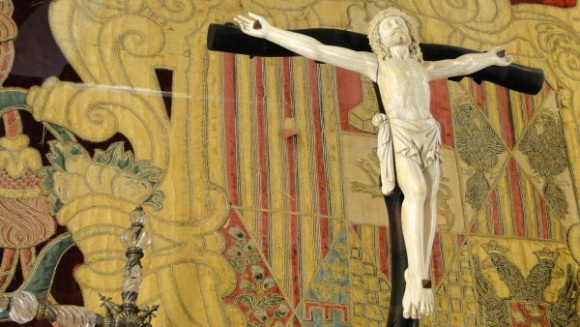 Religious use of ivory is a prime driver of deadly ivory trade worldwide, this goes against most religions’ injunctions to care for creation. (Photo: AP)

There are 7 billion people in the world and counting and every one of them has a worldview, a lens through which the purpose and meaning of life is derived. These individuals gather together with others who have similar beliefs, establishing the more than 730 religions in the world and 3,200 different sects. But with such diversity, is there anything that we have in common other than being human?

I do not claim to know everything there is about social studies, anthropology or religion. But a few weeks ago I started to see this common thread linking together people who may otherwise have nothing in common.

The first thread came in the form of a tweet from scientist and outspoken atheist Richard Dawkins, “Ivory from Thailand is legal, so African ivory is easily traded. Sign petition to have ALL ivory banned in Thailand.”

Before that day, I thought I held nothing in common with Dawkins. Excited to see this tweet, I retweeted it and made it a favorite tweet of mine. He is an atheist, I am a Christian, but now I know we both want to save Africa’s elephants by banning all ivory in Thailand.

Then I read National Geographic’s blog “Elephant Voices” – a blog dedicated to spreading awareness about the current events of the ivory trade (elephants are currently being poached at such alarming rates that there is the possibility of extinction in Africa by 2020). One article on the blog was titled, “A Call to Spiritual Responsibility” and quoted religious leader Ogyen Trinkley Dorje:

At the root of all religions are the same basic principles. Live simply. Act with compassion. Be king to one another. Nowhere does any religions say that we should destroy the very thing that gives us life. So, I feel quite confident saying that from a religious point of view, we must coverseve all life and protect Earth. (H.H. 17th Gyalwang Karmapa, Ogyen Trinley Dorje)

After seeing Richard Dawkins’ tweet, I would add to the above quote that nowhere does any religion, or non-religion, say that we should destroy the very thing that gives us life.

On the same blog, “Elephant Voices”, I saw a post about the religious use of ivory, specifically directed toward the Catholic church and their icons. The Vatican response to the report stated that, “We are absolutely convinced that the massacre of elephant is a very serious matter…” and their  catechism states that, “It is contrary to human dignity to cause animals to suffer or die needlessly.” This brought to mind a quote from Pope John Paul II that “the earth will not continue to offer its harvest, except with faithful stewardship. We cannot say we love the land and then take steps to destroy it for use by future generations.”

The common thread I detected is that people of very different backgrounds all revere one truth: the care of creation, and in this case specifically, the care to ensure the survival of the world’s largest land-mammel, the elephant.

To see if there was more truth to this than just Dawkins, Dorje and the Pope, I decided to do a little research and found the following verses and quotations from very different leaders, all holding the same opinion on the care of creation.

Lao Tze, believed that we should “Love the world as you love yourself.” And Mahatma Gandhi understood that “What we are doing to the forests of the world is but a mirror reflection of what we are doing to ourselves and to one another.” The same could be said about elephants, that what we do to these magnificent creatures is just a reflection of what we do to ourselves. The cost of ivory poaching results in thousands of elephant deaths (a conservative estimate is 25K elephants were killed in 2011) and hundreds of human lives each year (13,000 humans have lost their lives protecting wildlife in the last eight years). In the words of Margaret Mead, “We won’t have a society if we destroy the environment.”

Interfaith activist Eboo Patel sums up religion and the call for compassionate conservationism:

Yet ivory continues to be used throughout the religious world, especially in China and surrounding Asian countries. There, ivory carving is seen as a cultural practice, having been done for over 2,000 years. Journalist Bryan Christy reports for National Geographic that ivory is used in Thai Buddhism, even though the elephant is the symbol of Thailand and greatly revered. Kruba Dharmamauni, a prominent  Buddhist monk known as the, “Elephant Monk,” wears an “ivory elephant-head pendant suspended from ivory prayer beads representing the 109 human passions.” In the recent documentary, “Battle for the Elephants“, Christy reports that “The Buddha would not be pleased” to see followers destroying the elephant to use in religious practices, especially as many are told the elephant wants to be killed to allow humans to use it’s ivory through worship. Buddhists in China have the mis-conveyed belief that “to be respectful of the Buddha, one should use precious material. If not ivory, then gold. But ivory is more precious.” And the more precious, the more priceless. Literally. Christy found carved ivory Guanyin (ironically, a representation of compassion) on sale for US $215,000.

Unfortunately this is not a problem unique to Buddhism. Christy’s report contends that thousands of elephants are slaughtered to:

satisfy religious devotion, their tusks smuggled into countries to be carved into religious artifacts: ivory baby Jesuses and saints for Catholics in the Philippines, Islamic prayer beads for Muslims and Coptic crosses for Christians in Egypt, amulets and carvings for Buddhists in Thailand, and in China—the world’s biggest ivory-consumer country—elaborate Buddhist and Taoist carvings for investors. (read Bryan Christy’s full report HERE)

This great juxtaposition between what religions claim and what their followers actually do is tragic. All religions claim the responsibility for humans to care and preserve the world, not plunder and destroy it. By all reason, these religions should be working to preserve and protect the elephant if they truly believe what is written in their scriptures and espoused by their leaders. And for Chinese culture to continue for another 2,000 yeas of master ivory carving, we need elephants to survive as well. Conversing with, and educating, the religious about the destruction of the ivory trade is key. Christy states in this video:

if you could get at what drives people to buy ivory for religious purposes, you have a chance to change their opinions and that’s something you very rarely have. You do have a series of disconnects between the love of an elephant and what’s happening to get that ivory…Americans probably have difficulty understanding the extent of ivory trafficking and the problems that it’s causing – people are loosing their lives over this – and religions are driving it. It seems to me that there is an opportunity given the deeper value systems to make a difference, to make a change.

It is time for those of us with a, “deeper value system” to make a change. It may not be comfortable, it may not be easy, but it is necessary if we want to ensure the well-being of a range of ecosystems dependent upon the elephant. It is time for the world to see the common thread that unites us: the call to care, and work together to save one of the world’s most precious animals – the elephant.