The End of the First Month

It’s hard to believe we’re already coming to the end of January. A lot has happened for elephants this year.

On January 6, 2013, China destroyed 6 tons of ivory. This was the first time China — which according to CNN reports, accounts for 70% of global demand for ivory — had destroyed any of its confiscated ivory. Jianguo He, who has worked against the ivory trade for 12 years with the International Fund for Animal Welfare (IFAW), said witnessing the event was bittersweet:

“When you see six tonnes of ivory, you can’t help but think ‘how many elephants was that? What did those elephants die for? Ivory is not a necessity, it is simply a luxury item that people don’t need. Every ivory product means an elephant was killed. That means a loss of life and a loss of biodiversity. This is not art any more. People are exploiting nature for all it can give.”*

The sad truth is, this amount that was destroyed represents only a fraction of the amount housed in China. Some estimate*  there is closer to 45 tons of ivory stored in China!  Although this was a great first step, advocates pushed for China to do more. And on January 23, Hong Kong announced the plan to destroy 28 tons of ivory  in three batches beginning July 2014. That represents the tusks of about 11,000 elephants. The country plans to keep 1 ton of ivory for “educational and scientific purposes.”

China, which accounts for 70% of the illegal ivory trade, still has a long way to go. But we are pleased to see how 2014 is starting out - and are hopeful that maybe this year will be the year of the elephant! 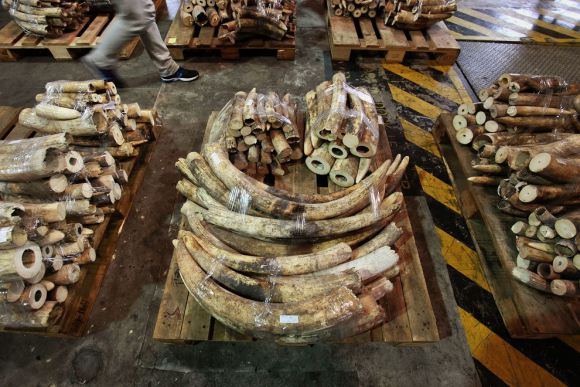 A shipment of more than 700 ivory tusks worth over $1 million was seized by customs officials in Hong Kong in early January 2013.
PHOTOGRAPH BY BOBBY YIP, REUTERS

The fight for elephants began in November of 2012 when then Secretary of State raised awareness about the elephant crisis and the need to stop the slaughter of Africa’s elephants. President Obama gave an executive order in July 2013 earmarking $10 million for training and technical assistance in Africa to combat wildlife trafficking. He also created the White House Task Force on Wildlife Trafficking. Then in the fall of 2013, 18 global conservation groups announced a 3-year, $80 million Clinton Global Initiative Commitment to Action to stop the killing, stop the trafficking and stop the demand for ivory. They were joined by 7 Africa heads of state calling on consumer and transit countries to ban the sale of ivory. November 2013 the US crushed 6 tons of ivory and put $45 million in new funding to combat wildlife trafficking in the fiscal year 2014 budget along with a bill that would place a moratorium on all domestic ivory sales. On January 16, NY Assembly Members met to discuss this bill to ban the ivory trade here in the US. Many of you wrote letters and received responses like this. At the hearing this month, Assemblyman Sweeney was disturbed to hear that “New York has become one of the main points of entry for the illegal ivory trade,” and for that reason he wants to see a policy change on the local level. One outcome of the hearing may eventually be a push for a statewide ban on ivory sales. WCS will be supporting such action through its newly launched 96 Elephants campaign.*

It’s taken a few years, but we are excited to see the world’s second largest consumer in ivory taking large strides to combat the illegal ivory trade. We look forward to 2014 with hope that our leaders will vote YES to ban the sale of ivory. If you haven’t already, please send a note to your local government officials. CLICK HERE for a template (copy/paste and email to your local government officials) or if you live in Texas, sign THIS PETITION. 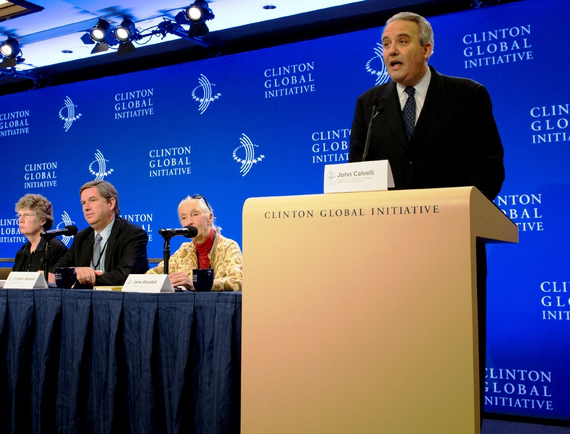 Great strides have been taken in Kenya to fight back against poachers seeking to destroy the wildlife heritage of the nation as well as create political & social unrest. Last fall 2013, terrorist Al Shabaab attacked a mall in Nairobi. Later it was found at least 40% of the terrorist group funding came from the illegal ivory trade on the black market. Hand Off Our Elephants campaign backed by First Lady Kenyatta began an initiative to strengthen anti-poaching laws. We are pleased to hear that in January of 2014, a bill was signed that increased fines and added possibility of life sentences in jail. And it’s already bearing fruit: earlier this week, Tang Yong Jian, a Chinese national, who was allegedly attempting to smuggle 3.2 kilograms of raw ivory out of Kenya to China, was caught. He faces a $230,000 fine OR 7 years in prison if he doesn’t pay. Prior to the new law (Wildlife Act of 2013), Tang Yong Jian would have been free to go after facing less than a $1000 fine, a punishment that provided little deterrent to smugglers because ivory fetches around $2400 per kilogram in China.

Next door to Kenya, Tanzania is loosing the most elephants per year in all of Africa. The Selous, a World Heritage Site, is now known as “Africa’s Killing Fields.”  The Mikumi-Selous ecosystems have just 13,084 elephants left (compared to 39,000 in 2009), Ruaha-Rungwa ecosystems have just 29,090 elephants left, and the Kilombero Game Controlled Area have no elephants left. Tanzania also houses the worlds largest storehouse of confiscated ivory. Currently the country is asking CITES for an allowance for a one-off legal sale. But ivory cannot fund conservation. Take a moment to CLICK HERE and contact Mr. Lazaro Nyalandu, Minister of Natural Resources and Tourism, and ask him to destroy Tanzania’s ivory. In doing so, this would send a clear and critical message to the world, much like the ivory burn in Kenya in 1989. 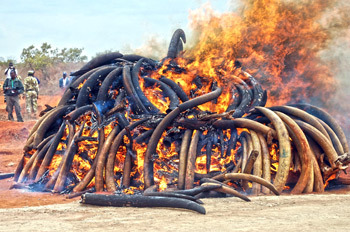 We had our first official board meeting this month! We are busy writing our vision and mission statements as we begin the process of applying for nonprofit status. Our goal is two-fold: we want to raise awareness about the ivory trade elephant crisis through educational campaign and action events here in the States, and we want to partner with a local community in Africa to protect the elephants while supporting locals who may otherwise see the elephant as merely a pest or as white gold. Plans are underway for an educational campaign aimed at elementary students here in the US and we are having discussions are with an elephant orphanage in Africa about how Elephantopia can be a part of their mission to restore whole communities (both for elephants and the local people). With all the positive movements for elephants this January 2014, we are hopeful that this year will be a peaceful and protected year for the elephant.