The Elephants of Christmas Past

December has been particularly busy for me. I’m a full time musician who happens to love elephants and has dedicated all my free time to running this educational awareness blog. With holiday gigs, I haven’t had a lot of time to write posts, but I have been busy sharing ele-news on Elephantopia’s facebook page (if you haven’t LIKED it yet, head over there now!) One of the news items I want to post is about Raja’s birthday coming up next week, December 27 (the same day as my husbands!) But in order to stem any potential misunderstanding, I thought it best to dedicate a blog to the topic.

You see, Raja lives at the St. Louis Zoo. There are a few different groups of ele-advocates, some that are like zoos, and some that detest zoos. This post isn’t about being pro-zoo or anti-zoo. It’s about Raja. And how this Christmas elephant from my past has shaped my love for elephants in the present.

This love affair with elephants began at the young age of six when, living in Memphis, I visited the elephants with a “backstage pass” getting to stand right next to the giants to feed them some carrots! A few years later I moved to St. Louis where Raja was the first elephant to be born at the St. Louis Zoo. My family had a zoo membership, so of course I participated in all the festivities leading up to his birth December 27, 1992. I still have a small figurine of Raja that I purchased!

Do I think they are the best place for animals? Of course not. The best place for animals is in the wild. Do I think some zoos mistreat their elephants? You bet - elephants need SPACE and FAMILY and not all zoos provide these two critical elements. But do I think zoos play an important role in educating the public on conservation matters while eliciting deep & lasting connections between humans & animals? Yes, because my experience with Raja did that for me.

Again, I know this post will probably evoke heated responses from people. But I can’t deny how important Raja has been to my life. And so I face Raja, the elephant of my Christmas past, with a thankful heart and with hope for the future as I continue my study of elephants with efforts to help others find a spot in their hearts for these most amazing animals. 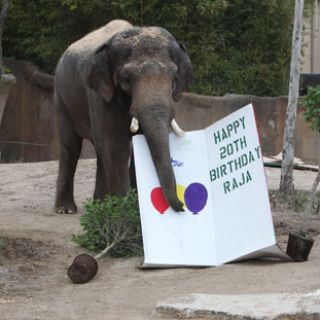 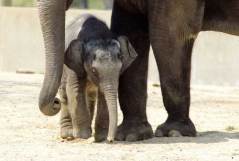 Raja as a baby 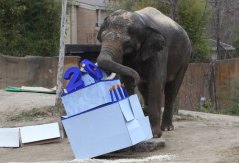 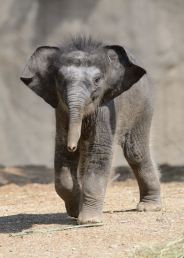 Baby Priya, one of Raja’s children born earlier this year

P.S.  The issue of elephants in zoos is deserving of an entire blog post, which as I stated is not what this post is about. However, for the sake of clarity, here is a brief outline of some thoughts I have on zoos…Having lived in South Africa, seeing elephants in the wild roaming hundreds of miles & living in large family herds, it’s easy to see how zoos fall critically short in being able to provide the space for these magnificent beings. This lack of space often leads to elephant obesity, arthritis and boredom. In the last few months, zoos around the world have lost elephants which makes many question the safety & care of elephants in zoos (Baby Sanook in Melbourn, Maude in Miami…a full list of elephant-zoo deaths from 2000-2012 can be found here). And of course, then there is the mysterious EEHV virus that is found in most elephants in zoos. There is still research being done to figure out what causes the virus, how it spreads, and a search for a cure (although I am excited that the Houston Zoo received a $500,000 grant earlier this year that will fund three additional full-time research positions over three years, tripling the resources currently at the zoo’s disposal). This past year, I decided I wanted to get a better understanding of zoos and so I volunteered at the Houston Zoo putting in over 100 hours with the goats, sea lions, elephants & public education. I’ve seen firsthand how the keepers care for our animals, the time, energy, and love that goes into a job full of hard labor.  The zoo even supported the Houston March for Elephants Elephantopia organized. I believe that all zoos are NOT equal but that the Houston Zoo is a good place filled with people who really love their animals and are doing the best they can to care for them. They are committed to educating the public about extinction issues while partnering with organizations around the world who are working in the front-lines of conservation (such as Save the Elephants with Dr. Iain Douglas-Hamilton).