We love elephants! These gentle giants are a keystone species in Africa, meaning that hundred of other plant and animal species rely on them for survival. We have so much to learn from these communal animals - but with one elephant being killed every 15 minutes for their ivory, there is a real possibility that elephants may be extinct in some parts of Africa by 2025. Our team of volunteers at Elephantopia are dedicated to ensuring a happy and safe future for all elephants - we are not willing to let E stand for Extinction, we are working hard to keep E standing for Elephant!

We’d like to take this time to share with you a few snippets of what we’ve been able to do this year because of your support.

We believe in using art and education to help raise awareness about elephants and the ivory trade. This summer we partnered with a local Californian artist who created four beautiful canvas paintings of Kavala, the orphaned elephant victim of the ivory trade currently being cared for at the Kafue Release Facility in Zambia. Prints are still available, click here for details.

We also partnered with children’s book author Marian Hailey-Moss, proceeds of her coloring book going to Kavala. Get your coloring book and read our exclusive interview with Marian here.

This fall, we joined with another 501c3 nonprofit CIFAE to raise awareness for elephants and the ivory trade in August for World Elephant Day and again in October for the Global March for Elephants and Rhinos. Hundreds of people gathered together in Gainesville, FL and signed the petition to ban ivory in Florida, sent thank you letters to rangers on the frontline protecting Africa’s wildlife from poachers, and marched through the streets raising awareness about elephants and the ivory trade.

As we look at 2016, we are hopeful that with nearly 100,000 signatures on our petition to ban ivory in FL that this state will join New York, New Jersey and California with an ivory ban. As a port state, Florida is a critical state to protect elephants from the illegal wildlife trade. We also are excited to be sending our founder and president Elizabeth Chitwood to Zambia as a research assistant with Game Rangers International in May. She will also be leading a photography safari to Zambia for ten days visiting the GRI Elephant Orphanage, Kafue National Park and South Luangwa National Park. If you’re interested to join, there’s still a few spaces open! Email us here for details.

Your continued support is critical to our projects in Zambia and the United States. As a 501c3 nonprofit that is fully run by volunteers, we thank you for your generosity and are excited to announce that we are now listed on PayPal Giving - and through December 31, 2015, PayPal will donate an extra 1% to your donation. Take advantage of this opportunity to give 101% to helping us save elephants and build community. 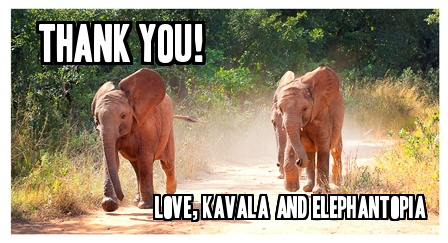 The Elephant in Gainesville

Posted On October 5, 2015 ~ 0 Comments
This past 3-4 October, Elephantopia was proud to support the Global March for Elephants and Rhinos (GMFER) in Gainesville, FL. The weekend began with festivities…

Posted On April 7, 2013 ~ 2 Comments
Elephants are awe-inspiring. They are the world's largest land mammal. They live in families. They have emotions and communication methods. They are incredibly intelligent and…

Posted On November 27, 2013 ~ 0 Comments
As November comes to a close, it only seems appropriate to share a note of thanks. Thank you for sharing your pictures, your stories and…