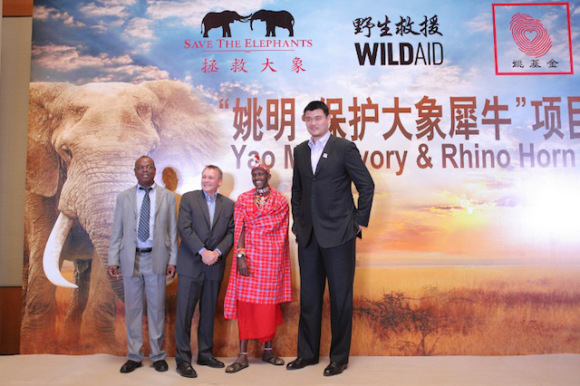 In 2012, former NBA star and Chinese icon Yao Ming toured Africa to learn more about the reality of poaching and to capture footage for his upcoming documentary, The End of the Wild, airing later this year in partnership with Natural History New Zealand. This past April 16, 2013, he launched a campaign in Beijing to raise awareness about elephant and rhino poaching with the help of WildAid, Save the Elephants, African Wildlife Foundation and the Yao Ming Foundation.

The revealing statistics listed below, were compiled from a Chinese research company Horizon Key over two separate studies in the three major cities of Beijing, Shanghai and Guangzhou, highlighting common misconceptions about ivory in the Chinese population. (Shared from Africa Geographic)

- Over 50% of the nearly 1,000 participants do not think elephant poaching is common.
- One of three (33%) believes ivory is obtained from natural elephant mortality.
- Two of three (66%) are not aware that rhino horn comes from poached rhinos.

In both studies, over 90 per cent of the participants agree that the Chinese government should enforce the ban on ivory trade and take stricter action to prevent the use of rhino horn. ‘Because of the demand for ivory, poaching has erupted all over Africa,’ …Over 25,000 elephants are today poached and killed annually for their ivory, reaching a level seen only before the 1989 international trade ban.

Yao Ming is intent on changing the attitudes and understanding of the Chinese population towards ivory. His last campaign against shark finning in China was a huge success. It is credited with a reduction of 50-70 percent in shark fin consumption. As he undertakes this new campaign, the challenge will be that he is not only fighting a cultural heritage of ivory carving, but  he is also up against greedy consumerism. The ivory trade generates billions of dollars and is often listed with other  illicit crimes such as human trafficking and the drug trade.

But Ming is confident that his people will listen to his message, and respond. As he says,

Poaching threatens livelihoods, education and development in parts of Africa due to the insecurity it brings and loss of tourism it generates…when people in China know what’s happening, they will do the right thing and say no to these products.

For future of Africans, elephants and rhinos, I hope he is right.
Below is a trailer for his documentary. As there are a few short graphic scenes, view discretion is advised.

For the Love of Elephants 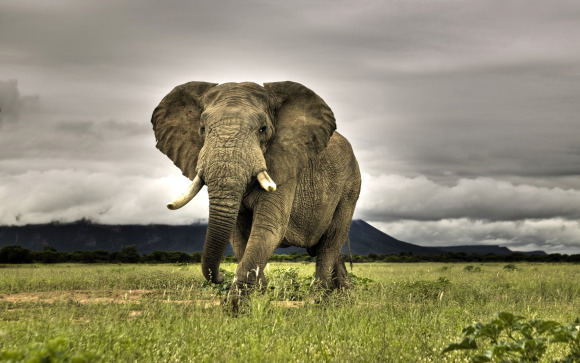 It is extremely encouraging to see so many high-profile people speaking out against poaching and the use of ivory. Some of our favorite articles, videos and pictures from celebrities are below. We hope this may inspire you to take a stand against the ivory trade by sharing this blog with your friends to help spread public awareness on the issue, or by sending a letter to your local government urging them take action in this crisis. For Americans, consider signing this letter to John Kerry, our current Secretary of State.

1. Hillary Clinton whose “goal is to inform more people about this global conservation crisis.” Her daughter Chelsea Clinton, NBC News Special Correspondent, has produced two reports on the ivory trade. Her goal, much like her mother’s, is to spread awareness about the threatening levels of elephant poaching in East Africa. By clicking on either link, you can see some great photos and watch short clips from CBS and NBC.

2. Yao Ming, China’s most widely known public figures, is committed to spreading awareness among Chinese about the need to stop purchasing ivory products. His goal is to “eliminate the demand for rhino horn and ivory right at the source.” 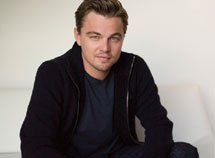 3. Leonardo DiCaprio has teamed up with International Fund for Animal Welfare to lead an anti-poaching campaign called “Elephants Never Forget.”  He says, “In the past century, the number of elephants in the wild has declined by 50 per cent. Their disappearance could devastate ecosystems and have a lasting impact on the biodiversity of our planet. I hope this program will inspire and empower you to help protect elephants worldwide.”

4. Kristin Davis has a campaign to adopt orphaned elephants 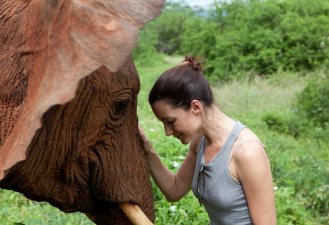 which she shared on Oprah. She says getting involved with the elephant orphanage has opened her eyes. “I think it gave me more respect than I even would have ever dreamt of having for their entire being and how important it is for us to care for their world, as well…It’s such a sad commentary that animals would be becoming extinct because we’re thoughtless. It’s so awful.” Recently, she was interviewed on MSNBC with Alex Wagner .

Do you know of any celebrities or leaders who should be added to the list? Let us know so we can give these people a shout out!

I am proud to team up with NBA Cares and WildAid to raise awareness about the illegal trade of wildlife products and wildlife conservation…It is my hope that together we can encourage people to stop buying and ultimately stop poaching.

Much of the ivory trade is occurring in China where the public has not been educated about elephant tusks (they believe that tusks naturally fall off, not realizing that each tusk represents an elephant killed). The iWorry campaign has created websites in Chinese and Japanese to educate this market - this is a significant step in elephant education in Asia! Check out this announcement from the iWorry campaign below:

We are very excited to announce the launch of our Chinese (Mandarin) and Japanese versions of the iWorry campaign! As known buyers of ivory it is important to reach out and educate those who are unaware of the brutal truth behind the devastating ivory trade. We are very grateful to our wonderful volunteers, Kaori Hill and Soe Cheung allowing us to make these translations a reality. Please share the links below with friends around the world and help us reach our target of 50,000 signatures before the CITES meeting in March.

And if YOU haven’t signed yet, here’s the link in English: